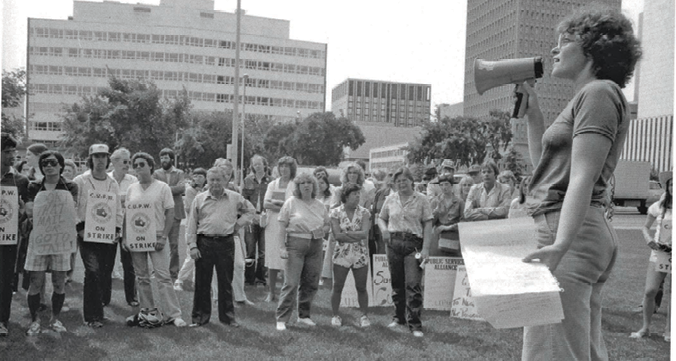 As co-instructors, we are currently teaching a course on the history of women and work. Our primary concern in this course is to have students think historically about women’s lived experiences under capitalism. We explore how things looked in the past, how they were transformed over time, and, in turn, why they look the way they do today. By teaching in this way – pulling history into the present – we aim to re-center the enduring struggles of women to create a better future. Moreover, we try to dismantle the notion that gains are bestowed on societies through benevolent states or the calm functioning of legislative powers. Whether it be suffrage, equal pay, women’s liberation, gender parity, the right to choose, sexual harassment legislation, or LGBTQ2 rights, all were widely disparaged yet courageously fought for through the direct action of women and their allies.

The struggle for maternity leave by the Canadian Union of Postal Workers (CUPW) serves as a particularly powerful lens through which to analyze these themes.[1] By the 1980s, the union began to push seriously for the inclusion of maternity leave as a core bargaining demand. The Treasury Board of Canada Post, with whom CUPW was negotiating, as well as the government was worried about the spillover effects. If Canada Post agreed to paid maternity leave, then other government departments, and even the private sector, would be forced to follow suit.[2]

With negotiations going nowhere, CUPW went out on strike. Their demands were multifaceted, but maternity leave was singled out by capital, media, government, and the public.[3] In turn, maternity leave was deemed egregious, unnecessary, and even greedy. Risking it all, postal workers and their allies fought for forty-two days and won. Their victory reverberated across Canadian society. Other unions quickly followed suit and, before long, the government institutionalized and expanded maternity leave to equalize the playing field. What started out as a gain for postal workers quickly turned into a gain for all Canadian women.

It’s important to recognize the spirited efforts of CUPW members during the strike to illuminate that progress doesn’t happen without struggle and courage. But it’s even more critical to shed light on how the 1981 strike was demonized. This is in stark contrast to how maternity leave is presented today – a fundamental right to be enjoyed by all Canadians. Indeed, it’s even commonly referred to as a “Canadian value” that differentiates us from our southern neighbours.

In our course, we think about what accounts for these kinds of shifts in societal thinking. How was maternity leave reconceptualized from a “greedy demand” into a core Canadian tenet? We also explore the problems and consequences of these mythologized understandings. What is conveniently forgotten in current conversations about maternity leave? How does this impact the narrative surrounding strikes and the way in which they are understood?

With a postal strike looming, it’s worthwhile to challenge the depoliticized accounts of gains made on the picket line. How many people have enjoyed maternity leave without knowing its history? How about the weekend or the eight-hour day? Pensions? Minimum wage? So many things that we now see as normal, even integral, parts of society were gained in this way. Yet the strike continues to be framed as fruitless, unruly, and inconvenient.

Our speakers, Kim Smith, Elaine Knight, and Jeanie Campbell, addressed each of these themes in their talks. Their reflections on the strike showed students how change looked “on the ground.” It further reminded them that expanding the progressive horizons of society is always met with tremendous opposition. Perhaps more significantly, our speakers breathed new life into our teaching by allowing students to interact with living subjects. This is particularly significant for our class, which is primarily composed of women. By proudly relaying their role in an event of such significance, our speakers challenged preconceived notions of who actually enacts change in society, an aesthetic that is so often elite, male, and white. Moreover, they sundered overly-romanticized, or simply uninformed, ideas of what a striker, activist, or union member looks like. As Jeanie reminds us in her talk, “don’t let this innocent face fool you.”

Mikhail Bjorge earned his PhD in History at Queen’s University. Kassandra Luciuk is PhD Candidate in History at the University of Toronto. They are currently teaching a course in the School of Labour at George Brown College. Together, they would like to thank Kim Smith, Elaine Knight, and Jeanie Campbell for their participation in the course and for their longstanding activism on behalf of all working people.

[1] Canadian postal workers have a long tradition of militancy. During the Great War, postal workers staged a nation-wide general strike for higher wages and better pay despite a wartime ban on strikes generally, and for public servants specifically. In 1965, they led wildcat strikes against sexual harassment and for better pay. In fact, the wildcats of ’65 were the main reason why the Canadian government institutionalized collective bargaining for public servants in 1967. By the 1970s, the relationship between the union and management (and by extension the government) was especially poor. Not only did CUPW members come under state surveillance, but in 1978 CUPW’s then-President Jean-Claude Parrot was sent to jail for refusing a federal back-to-work order.

[3] Not even the Canadian Labour Congress initially supported the militant democracy exhibited by CUPW.

Gathering the Memories – An Oral History of Toronto Labour

The TWHP is launching a new project to gather the memories of the old-timers in Toronto’s labour movement. So much of the history of the struggles of the city’s workers is available only in the stories that these women and men can tell.

Who should be on the list to be interviewed? Anyone who made an important contribution to the struggles of working people in this city. They don’t have to have been president of their union. We want to cast the net widely.

Send us names and contact information, with ages and health condition of these people, along with some information on what they contributed to labour’s cause. We’ll follow up and contact them. Better yet, please fill out this form with as much information as you have.

⏰(TONIGHT) And now for something completely different…A film and a discussion night - https://mailchi.mp/0e7484a84af3/scarborough-movie-9091909

And now for something completely different…A film and a discussion night - https://mailchi.mp/20bf2110a522/scarborough-movie